Our physiotherapists Femke and Trudie headed to Belfast in October to attend the 2nd World Congress of Sports Physical Therapy discussing Optimal Loading in Sport. Whilst they were there, Trudie had the pleasure of meeting and chatting to 5 x Olympic medallist Dame Katherine Grainger – Olympic rower.

This summer Femke travelled down to London to be part of the medical team at the IAAF World Championships. She was treating athletes predominantly at the Olympic Stadium and at the Royal Mall for the race walk. 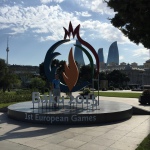 Following on from the Olympic Games - London 2012 and the Commonwealth Games - Glasgow 2014, Femke and Catherine (both physiotherapists at Durham City Physio), were fortunate to work at the Inaugural European Games held in Baku, Azerbaijan. The Games were held there in June 2015.

It was a wonderful experience.

Following on from the Olympic Games in London in 2012, Femke Nauschutz, Physiotherapist at  Durham City Physio Ltd, worked at the Commwealth Games in Glasgow. She was appointed Lead Physiotherapist for Marathon and Road Cycling.

In June 2014 Femke attended a 2 day Sport Symposium at Newcastle United Football grounds in Newcastle. The 2 days covered tendon pathologies, the sporting knee, the sporting groin, the sporting back and workshops.

In October 2013 Femke attended a very interesting 2 day shoulder course, organised by Prof Len Funk, an Orthopaedic Surgeon in Upper Limb. The course was attended by many international delegates and held in Manchester.

For detailed information on shoulder conditions and surgeries, please refer to this website: http://www.shoulderdoc.co.uk/

Femke Nauschutz has recently been chosen as a Physiotherapist for the London 2012 Olympic Games. This is a voluntary position as a Games Maker, and she will be based in London from the 19th of July until the 12th of August.

She feels very privileged to play a small part in the biggest sporting event in the world.  Having been involved in sport for most of her physiotherapy career, this is a dream come true.

Watch this space for further developments!

To book an appointment: